If you like horse racing, during October and November Melbourne is the centre of the world. On the first Tuesday of November the famous Melbourne Cup race is held in the capital Victoria. This race is also known as „The Race that stops the nation”. Whether you are in the mine, bakery, hospital, office at three o’clock in the afternoon, everything pauses for a moment, and through the television or the radio, you watch and listen to a 3200-meter race. 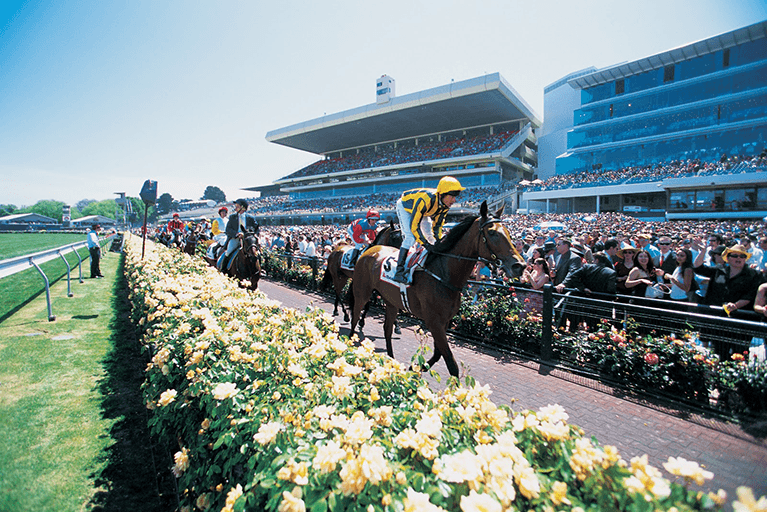 By rule, it brings joy to some, and sadness to others. What’s more, in the state of Victoria, every first Tuesday in November is a public holiday. Some deputies are already urging them to expand throughout the whole of Australia, to add it on Monday, and so celebrate the four-day holiday.

In race worth six million dollars, 24 gallopers compete, mostly from Europe, Asia, New Zealand and of course Australia. Melbourne Cup “is not just a fairy-tale race, it’s a special holiday. Over 100,000 people gather at the racing place in Flemington, which is once again the largest and most beautiful in the world. In addition to prominent political figures, as a rule, this magnificent race attracts celebrities from all spheres of life and all over the world. Celebrities who have already visited Melbourne in this time of year were Prince Charles and his wife Camila. They were in the honourable room as well as actress Misha Barton, photo model and former Miss Universe Jennifer Hawkins, singer Delta Goodrem, many personalities from Hollywood, Alexandro Del Piero the legend of world football and many others.

A big fashion show is also organised during this period, and ladies simply glitter with hats of various patterns. Everywhere all over Australia people are making barbecues, drinks and celebrate one of the biggest races in the world.

Most of the work remains for those who eventually have to clean race place up, and put it in order. In the same place in few days is held another famous race, the “Oaks Day” race in which only mares run. As a rule, on this day there are over one hundred thousand of people, mostly women who are simply competing, who will look more beautiful and who will have the most beautiful hat and dress for which they receive a valuable prize.

Glamour, luxury and fun are main associations for this event. When it comes to transportation, it can be complicated since the whole city wants to be in that one place, and many people are stuck in traffic, or travel forever with trains or buses. That’s why the best solution is definitely to hire chauffeur car in Melbourne, and make sure that your whole day is going to be perfect. You can choose luxury and comfortable cars, relax at the back seat and chat with professional drivers who know all parts of the town, and who will make sure that you arrive in time. Your journey will be stress-free, and you will travel in luxury and comfort looking and feeling great. To book Melbourne chauffeur car is very easy, and you can find most of them online.

The Spring Carnival Horse Race, which lasts for almost a month in Melbourne, is one of the biggest attractions of this beautiful city of 5 million people and, as a rule, provides hundreds of millions of dollars to the state treasury. If you are coming as a visitor in Melbourne in this time of the year, this is definitely place to be. Melbourne chauffeur cars  is organising transfer from the airport to you hotel or you can book chauffeur and a car for your entire stay in Melbourne.